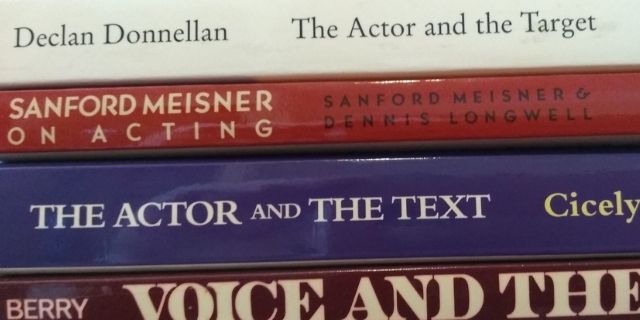 A year ago I posted some reading suggestions for taking stock and moving forward in your career; maybe something I should have kept it for this year. I am going to follow up on that post with further autumn reading suggestions, this year on acting technique. Though one of my suggestions could be useful to performers of any discipline. As I mentioned earlier on in lockdown, I have been struggling to sit and read a book or any other passive occupation; finding it easier to keep myself occupied with action based tasks. This has not gone away but is easing enough to allow me to do some reading.

Cicely Berry: Voice and The Actor / The Actor and The Text
Voice and The Actor is Cicely Berry’s classic book on voice technique used by actors and acting students for many years. I remember being taught its exercises in weekly voice classes whilst at Tring; It is a book I have owned and used for many years. Cicely Berry taught at the Central School of Speech and Drama for many years before moving to the Royal Shakespeare Company, where she became Voice Director. The book distills her method of voice teaching with plenty of exercises, turning it into a voice class you can do from home (or anywhere else). The Actor and The Text is one of Berry’s follow up books (she also wrote several others) taking the work covered in Voice and The Actor and using those techniques in the practicality of working with difficult texts, predominantly Shakespeare.

Declan Donnellan: The Actor and the Target
Written by Declan Donnellan, one half of the founder of the theatre company Cheek by Jowl, this book “targets” one of the actor’s greatest issues; fear; the classic “I don’t know what I am doing”, “I don’t know what I want”. In it Donnellan details his approach to acting, for the actor to have and to concentrate on the Target, and by doing so freeing the actor from the crippling fear of not knowing what they are doing. I read this book shortly after publication in 2002, and returned to it a few weeks ago, my first book in lockdown. The reread is proving to be very valuable. It is also a book I would recommend to performers from other disciplines who find themselves blocked or gripped by performing fear.

Sanford Meisner: On Acting
On Acting follows a group of students in Meisner’s acting class for 15 months from first to last day. It details the Meisner exercises they undertake, the scenes they rehearse, and the conversations in class regarding Meisner’s technique and his work as a performer. I bought this book after studying Meisner at The Actor’s Temple some years ago, and whilst it is definitely an interesting read giving background on Meisner himself and his approach, I did not find it a useful book for actually learning the Meisner Technique, for that you really need to attend classes. If you are already studying Meisner or plan to once physical classes resume then it is a good background read.